Involvement in the life of community

Together for children – Children’s Day in Słopanowo

On 10 June 2017, Słopanowo village authorities organised Children's Day Festivities on the yard in Kobylniki.For a few years, we have financially supported this event. This year we not only provided the organizers with financial resources, but our employees organized sports games for children. The kids could participate in such competitions as a slalom between the rolls of our clipband, throwing village leader’ cap, throwing a ball to the basket and catching ships printed on a 3D printer.The winners received symbolic prizes sponsored by our company and other participants were given sweets.
We also prepared large colouring books for children. They could be coloured by kids and their parents.
On our stand, everyone could see how a 3D printer works and what can be printed on it. Marek, who is responsible for development of 3D printing in our company, eagerly answered questions asked by the interested.

During the Festivities, children could play on inflatable slides, ride a carriage or watch a firefighting operation performed by firefighters from the volunteer department.
The day was sunny. The kids were smiling and our staff – glad that we could do something together for the little ones. We are already looking forward to another festivity.
We would like to thank the local authorities for their participation in this event. 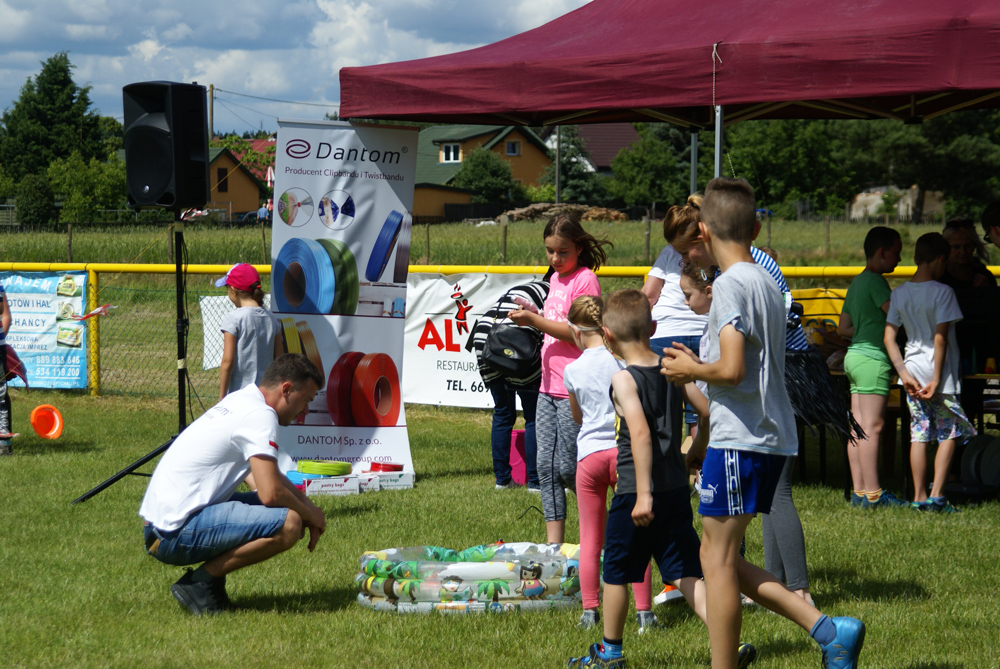 Development is the basis of our operation. The credit for our knowledge and opportunity of continuous seeking for new better solutions must be given to the scientific community. Well-educated specialists and access to the latest research facilitate creation of new products. This is why we support Polish science with gratitude. We have tremendous respect for the scientists who provide us with their assistance in our daily work.

We always check and test our products, therefore we hold attestations which guarantee safety of our production. Check it.

For several years it has been our tradition to financially support the festival celebrating Children`s Day which is organized by the authorities of Słopanowo village.

Festival "Let`s have fun together" ("Bawmy się razem”) was held on 06.11.2016 in the afternoon. Children could play on inflatable castles, ride in a carriage or fire engine. There was a show of fire fighting and a football game. The kids participating in sports competitions got small gifts.

Film "The Violin: Idiosyncrasies of a Perfect Creation" (August 2011)

Violin and music serve as the main character of this film. The film makers – the company SIDMA, try to solve the mystery - what secret lies in wood, paint, in the manner of exercising this instrument as the violin is considered the most important instrument of all - both in case of solo and orchestral music.

The film was made in close cooperation with the Music Society named after Henryk Wieniawski and the Museum of Musical Instruments in Poznan in the context of the International Violin Making Competition of H. Wieniawski which was held for the 12th time in May this year in Poznan. Polish violin maker Tadeusz Slodyczka and members of the international jury - violin makers and musicians are the guides presenting us the world of violin.

Financial co-partners of the film were the Local Government of Great Poland and the company DANTOM Sp. z o.o. The first public screening of the film took place as a part of the International Film and Music Festival TRANSATLANTYK - 07.08.2011 at 17:00 Multikino 51.